Stoke are going down. It probably helps to admit it. Unless you’re a player or member of the Stoke City management team, in which case please carry on as if we’re not yet. With every passing week, there’s a simultaneous arithmetic and divination exam we all set for ourselves.

“Well, we’ll only need two wins because Huddersfield will lose these games and Palace won’t win those, but we’ll need to win three if Southampton pick up a point here and Brighton fail to beat this lot.”

Days in which Stoke aren’t playing are more stressful and despairing than days in which they do. It’s more helpless, this way. You can’t even berate a ref, bollock our defence or sing your hearts out for our lads. Yesterday, for many, was the final nail in the coffin – even ahead of our visit to The London Stadium on Monday. That’s it, Stoke are going down. Something bad has happened to our club, and we need to know who to blame. It may or may not be the right time, but the knives are never out faster than when the goose is cooked.

For many, one man is the undisputed winner of the blame game. An ignominious season for Mark Hughes leaves him with the very real possibility of contributing to two teams’ relegations in one season. Failing tactics, poor results and without a shred of style to justify it, Stoke have been in a downward spiral on the pitch since early 2016, and Hughes clung onto the sinking ship like a stubborn barnacle.

Perhaps the Stokalona weeks raised expectations too highly, but Hughes’ problem was not being able to replicate the style that tore apart Man City and Man United – it was no longer aspiring towards it. Unnerved by poor results, Hughes lost faith in his own abilities as a motivator and was left scrapping around for a tactical system that could prevent embarrasment. As his final game proved, he never could quite manage it.

In recent weeks though, the conversation has moved on to other areas of the club – and other candidates emerge in the blame game. Tony Scholes and the transfer team have come under scrutinity for signings they may or may not have made – but who’s to say those signings might not have done better under a different manager? Or maybe the failure of Saido Berahino is solely down to Saido Berahino? Given the plethora of worrying stories coming from Clayton Wood, it appears the squad itself is a collection of the bad eggs. So, are we blaming the eggs, the chicken or the farmer? I’ll leave it to you to decide who’s who in that farmyard metaphor.

Paul Lambert too, is not immune. While most acknowledged the difficulty of his task, the optimism that followed the Huddersfield game wasn’t capitalised on – and his sole victory as Stoke boss has proven to be a dead cat bounce. While he is more tactically switched on, and has finally provided a competent defence – results and performances simply haven’t been good enough. 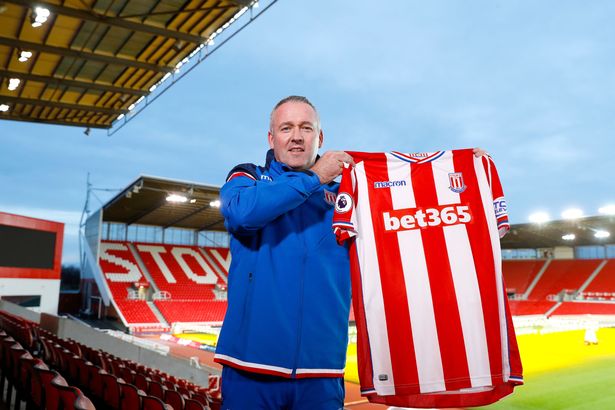 Or maybe we as fans should take some responsibility? After all, we did apparently see it coming. Why didn’t we make more noise – either in support of the team or in the direction of the powers that be? Maybe we became too complacent in our mid-table status and simply expected to be treated on a Saturday, rather than the 12th man we undoubtedly were in 2008/09.

Bad signings and bad tactics brought about the end for Hughes, but he was kept in the job too long. Which brings us to the final player in the blame game. Peter ‘What’s all the fuss about?’ Coates. A man who could walk on the River Trent a few years ago. His delay in sawing off the Hughes barnacle will be looked on as misplaced loyalty at best and relegation-worthy negligence at worst. As the main man at the club, fans will reluctantly turn their gaze towards the man who brought the good times back in the first place. It is the goodwill those years have bought him that will buy him time to steady the ship.

We now have to seriously ask ourselves what we want from our club. If we truly see ourselves as a Premier League club or if we’re just at the end of an unexpectedly long ride. Is Paul Lambert the man to chuck the bad eggs out? How do we stop the rot and avoid an apocalyptic Sunderland scenario? Are we going to be a side based on graft, hard work and spirit – or do we want to retain an element of the exotic from the Stokalona days? It’s going to be a long, hot summer. Until we know for sure how the club intends to respond, the blame game will continue.

While we may claim with all honesty that we’re looking forward to The Championship, we’re assigning blame because we’re upset and hurting. We’re an established Premier League club who very recently had designs on Europe, set to be relegated among one of the worst collections of also-rans the league has ever seen. The early season talk of ambition is now a cruel joke.

Coates, Hughes, Scholes, Lambert, The ‘Transfer Team’, The Players, The Fans. You may blame one of them, all of them or some of them. It’s a question of how much, and if you polled every Stoke fan you’d get wildly different percentages. The only thing that’s for sure is there are no winners.

Listen to the latest Wizards of Drivel Podcast