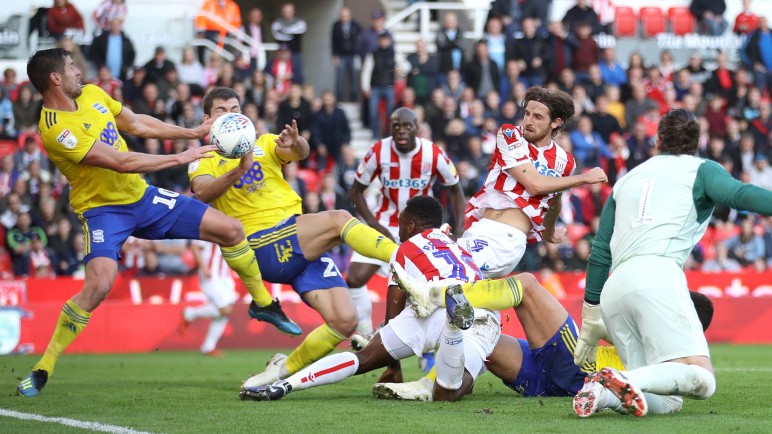 Just when I thought I was out, they pull me back in.

Perhaps the international break came at the wrong time for Gary Rowett’s Stoke. Having seemingly turned a corner with consecutive wins (and clean sheets) against Bolton and Norwich, Stoke’s momentum was sapped with a frustrating home defeat to Birmingham.

17th in the table after 13 games, having lost five games already, the season is threatening to already become a write-off for The Potters. For all the pre-season hype and optimism, performances and results have smacked of a team frantically trying to put its pads on rather than striding out confidently to bat.

Rowett has had a tough ask, and there have been instances where he could, and perhaps should, have got more points out of games. If Saido Berahino scores that penalty, if Roger East spots one of two obvious handballs, if Ashley Williams defends like a functioning footballer at Rotherham, or The Potters keep their concentration at Hillsborough, then maybe some of the discontent on the terraces would be more muted. That’s not to say Rowett has been unlucky, just an affirmation that ultimately he will only be judged on results. Valiant failure or hard luck stories aren’t buttering any parsnips for Stokies, who are already sick and tired of their team falling below expectations.

There are times when the Stoke manager does not help himself. His substitutions and team selections have often betrayed his overly cautious nature. Even as someone determined to see the back of Charlie Adam, I can understand him being brought on in certain situations – but not at the expense of one of few genuine creative talents he has available to him, with the score at 0-0.

Approach play has been stodgy and timid. Take the aerial route, and Afobe is too isolated and too easily bullied by the bruisers of The Championship. Play on the floor, and it’s ten minutes before a ball is played behind the opposition’s backline. The genuine eye for a pass that Bojan and Ryan Woods possess should be a tremendous advantage for Stoke, but both are playing way too deep to be effective. Apply that to the whole team and you’d have Jack Butland sat in row five of the Boothen End. It should be deeply concerning that Stoke’s best attacking play has come when one, two or sometimes three goals down – as the intensity to their play gets prompted by a sense of panic rather than a sense of confidence.

Tom Ince has been one of Stoke’s better performers so far, and despite his obvious limitations, he’s been Rowett’s best attacking player, sometimes because it looks like he is his only attacking player.  On the opposite wing, James McClean has been dire, living up to his reputation of being all filler no killer. With only industry and no artistry coming from the left side of the pitch (bar, bizarrely, two Erik Pieters screamers this season), more pressure is placed on Ince to produce, which can be tough for someone so famously inconsistent. In the middle of the park, Bojan (when he does play) can be doubled up on, as defences know that there’s little threat provided by Joe Allen.

Speaking of Allen, it cannot go unnoticed just how bizarre his consistent selection is. Allen started the season by continuing his dreadful form prior to relegation and remained in the side. Although the introduction of Woods saw that form improve, it seems that nothing Joe Allen does (and it is often nothing) will see him substituted or taken out of the starting XI. Yet Rowett’s loyalty to the former Liverpool man may be the least of his worries.

The defence has improved over recent weeks but this is not the defence of a team with top six aspirations. So easily bullied, so easily unlocked. Bruno Martins Indi is a shadow of his former self and there doesn’t seem to be much indication that Ashley Williams won’t throw the next game away on a whim. Cuco Martina has had decent moments, but has he added any more to the team than Tom Edwards would have? It’s a defence that seems only able to function properly when the rest of the team defends as a unit, as was the case at Carrow Road. Take the game to the opposition, and you leave them ready to be picked off, cueing the latest Jack Butland temper tantrum.

It’s one step forward, and two steps back. The Championship was never going to be easy, but it’s not unreasonable for Stoke fans to expect a bit more than what they’ve been getting. There have been games where Stoke have been much the better side, and maybe a tactical tweak here or there will take the team back to winning ways, but should they continue in this vein, Stoke City continue to be Championship mediocrity. Maybe we took Premier League mediocrity for granted? 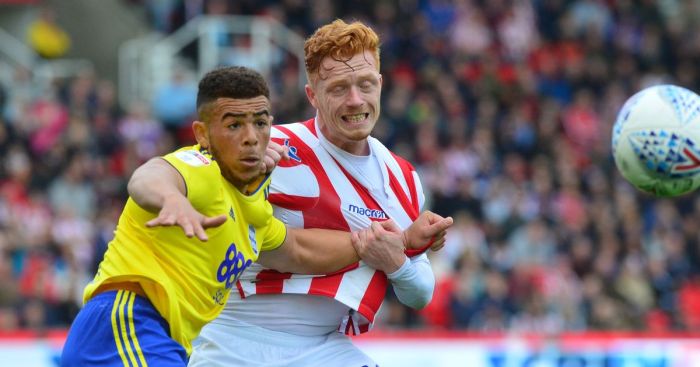 This is a side lacking intensity and confidence – two things that can be difficult for managers to remedy quickly, but it’s also a side lacking guile and creativity – and Rowett has the players at his disposal to threaten any side in the league. Yet he seems not quite sure of himself, and his team lacks a clear identity (stop me if you’ve heard this one before…).

There have been moments of promise, and for all the criticism of Rowett, it should be noted that the majority of signings have been strong, and often much needed. Ryan Woods, despite a below-par performance yesterday, has been superb and given time he may well guide this team back to the upper echelons of the table. For now though, you could forgive him slightly regretting his move from Griffin Park

The Birmingham defeat has left Stoke drifting further away from the top six, and further into the wilderness. This is not looking anything like a return to The Premier League for this new Stoke team, and should Rowett be allowed to use this season to consolidate and build for a promotion push next term, it puts even more pressure on him to deliver. At the moment, his team is an ordinary as he is.