“I think we play a brave style of football. I think the areas we ask them to play when pressured – it doesn’t matter what the opposition do to us we ask them to keep doing things that we do in training. When it’s difficult and when there’s 10,000 fans wanting you to score – and score quickly. We’re a brave group. And when things don’t go quite right, we still ask them to do the same things… We believe in a way of playing. We stick to it.”

Normally when Pep Guardiola’s Manchester City grace my television I can’t stop watching. Being a bit of a tactics nerd seeing the way in which City implement the ideas and vision of Guardiola can leave me breathless but I have barely managed to watch 60 successive seconds of this cup tie. Why? Nathan bloody Jones that’s why. Stoke City have appointed a manager with a football philosophy and the last time I checked the sky was not on fire, so sorry Pep you don’t have my full attention tonight.

I’m not an expert on – well, anything – but I’m certainly not an expert of either League One, Luton Town or Nathan Jones so a lot of the stuff here is based on interviews from the man himself, other words from people better placed than myself and a deep dive on YouTube. Now that has been established back to my verbal salivating.

Nathan Jones plays a 4312/41212/442 Diamond (further argument on this throughout the season). This isn’t a formation selected to suit his Luton side. This is the shape that Jones’ footballing world view is based on and is the bedrock of his philosophy, there will be no changing of this shape because it was too successful at his previous side. This diamond shape has been studied in depth by Jones and he transferred this onto his Luton side who were fully aware of how they should shape in both the defensive and attacking phases as well as the transitions to and from both.

The system allowed Luton to develop into one of the best attacking units in the Football League (outscored by only the aforementioned Man City in the 17/18 season) and is the reason they are currently topping both the xG and xGA table in League One. 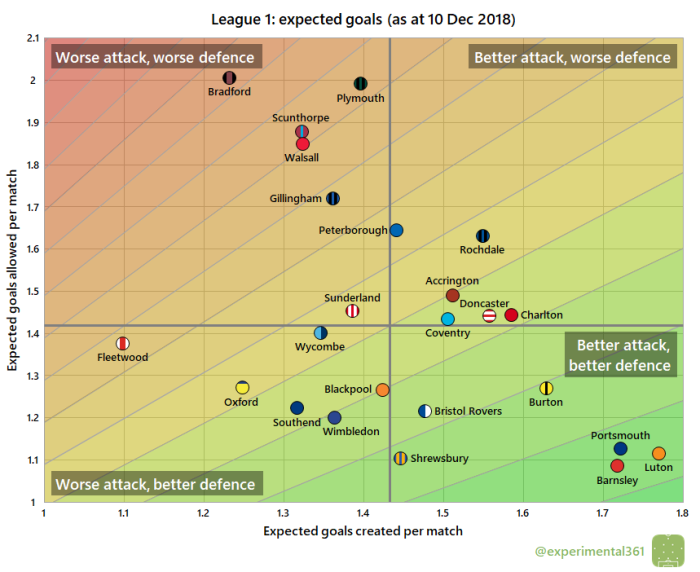 In the attacking phase Luton have relied upon overloading the opposition with attackers (two strikers, a number ten, two midfielders making runs from deep and two extremely advanced full/wing backs). If this swamping of players was not enough trouble for the opposition Luton’s players have such a deep understanding of the system that they were able to constantly rotate positions.

Little preview of what I've been working on for the last 12 hours. Watch the fluidity of positioning between Luton's LB (circle), LCM (triangle), and CAM (square). Gêm safle. pic.twitter.com/aaz8dTCrJv

Here we see everything from the traditional wide positioning of the full back squaring a ball to create the goal to the full back drifting centrally with the attacking midfielder pulling wide squaring for the full back to finish. This rotation appears key to the breaking down of more defensive units in an effort to break positioning solidity and create space for the attackers.

In the transition from attack to defence Luton appear to be a straightforward counter-pressing side, using the compact diamond and strikers to push sides wide and use the touchline to squeeze space or encouraging the ball to come inside where they maintain a numerical advantage. Should this be broken Luton have the ability to drop into two solid banks, the defensive four and the midfield three who shift across depending on which side the attack is coming from. Transitioning the other way (defence to attack) the centre midfield two and wing backs appear to be essential in shuttling the ball forward with line breaking passes and dribbles.

Luton are also prone to drifting wider when moving the ball from their own half. This still from the cup game against Sheffield Wednesday shows how both the wing back and right-sided centre midfielder have drifted out to the touchline. This seeks to either draw the opposition wide, opening up space in the middle, or to create an overload in the wide area allowing Luton to advance the ball from here.

If the opposition can cut off passing lines the fact that there are two centre-forwards with a number ten in support means that going long is not an aimless ball and Luton were more likely to win the second ball if they didn’t win the first. This is a good departure point to look at Stoke as we have struggled this season when going long to an extremely isolated striker (and because I’ve spent 700-ish words talking about a team I haven’t watched play an entire game of football). 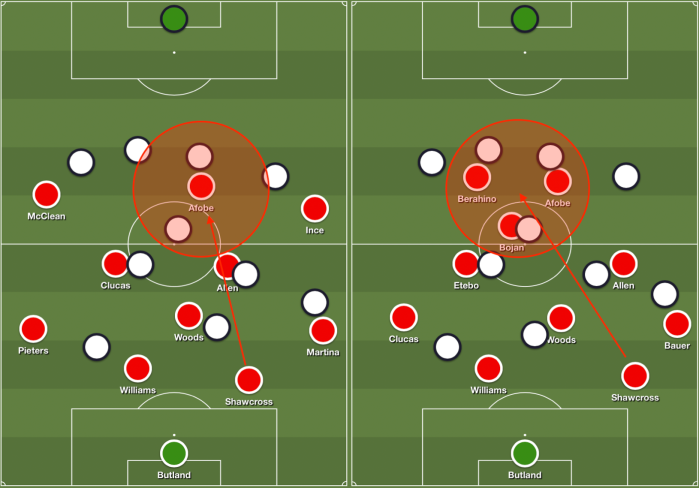 So what happens now? How will Jones attempt to implement this at Stoke? First and foremost, he will attempt to implement his culture into the club, something he managed to do at Luton. Jones came into Luton with 20 games of the 15-16 season left and has pinned all of his success on the work done in this time to ensure the squad bought into his vision and those that didn’t were moved on.

This process could be much shorter at Stoke as it appears that Jones’ principals of hard work and whole-hearted commitment to the system were implemented by Rowett (potentially his only success at the club but not one to be downplayed). This has been reflected by the players constantly defending the system to the media and stressing that the whole squad was committed to changing our fortunes, a serious change from last season’s disaster of a changing room.

We also have a squad that seems pretty well set for transitioning into Jones’ diamond system. Clucas, Etebo and Allen seem to be the kind of shuttling creative hardworking midfielders needed for the system. We’ve seen the quality of Woods in a holding position already this season, as well as sparks of good play from Afobe and Berahino. And most importantly we have Bojan.

I’m about to get very excited and carried away about our little Catalan magician’s future, if this isn’t your cup of tea skip ahead a few paragraphs. In his Luton set up Jones’ number 10, Elliot Lee, plays a key scoring role. Lee leads the way in both actual and expected goals per 90 for Luton and has already entered double figures for the season. So why do I think this is good for Bojan? 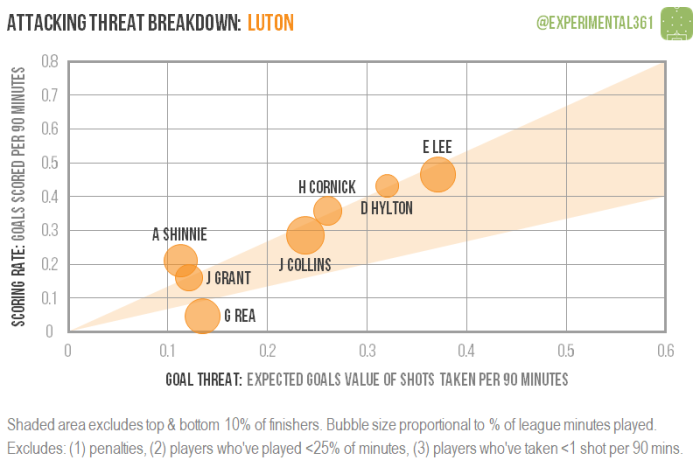 Well I have always considered our number 27 to be a much more goal focused number 10 than a creative type. This likely comes from his time spent as a striker at Barcelona both in the first team and the youth set up. This is why he made such an effective false nine back in December 2015. Bojan seems ready-made for Jones’ system and I would be astounded if he wasn’t at least given a fair shot to show his ability to contribute to it.

A less fortunate, likely casualty of the managerial change is James McClean. McClean can very much be described as a Rowett player but it is not his association with the former regime that will cost him his place in the side. McClean is as traditional as wingers come, and traditional wingers have no place in Jones’ diamond. McClean will have to adapt his game to either be able to contribute as a striker (more on this later) or perhaps even a wing back.

Tom Ince is likely to be able to adapt quickly to the system, with experience of playing as a number 10 at Huddersfield but this may not be the only position we see him utilised in. Harry Cornick (number 14 in the previous video) was considered to be a winger before joining Luton. He had played a smattering of games as a striker prior to joining Jones. The Welshman converted him into a forward, where he has scored 5 goals this season. This conversion is possible as Jones likes his striker to drift away from their central positioning to draw defenders out of position and create space for teammates. And it appears likely that Ince could be a recipient of the same positional refocus.

One area of the squad where we are lacking sufficient quality to implement Jones’ system is in the full/wing back department, especially on the left side of the squad. On the right we may see Mortiz Bauer brought in from the cold to potentially become the player a lot of Stoke fans believe him to be. And Tom Edwards could benefit from Jones’ tutelage, although I doubt the dribbling ability of either of these two options to truly suit Jones style.

The left is a much bleaker picture. Erik Pieters had rediscovered his defensive solidity before his injury earlier this season but his current attacking output leaves serious question marks as to whether he can contribute as an aggressive full back in Jones’ system. And with very little backup on this side it is almost certain that Stoke’s first recruit of the January window will be a wing back of some variety.

It will be interesting to see how Jones’ transfer policy sizes up to Stoke and what relationship he will have with the transfer team. At Luton Jones was praised for his deep research into players, ensuring signings had a natural role within the side and would not have to overhaul their own game to play in the diamond. He also focused heavily on the character of signings, so we will certainly have no Wimmer or Jese repeats. Again our increased transfer budget could allow Jones to mould the squad into one he can call his own in a much quicker time frame than he did at Luton.

Time is an important addendum to all of the above excitement and fawning. There are no guarantees results will immediately turn around. In his first 10 days of the job Jones has three fixtures, this leaves very little time to get his ideas across, so as fans we need to be supportive and show patience. Everything he achieved at Luton he attributed to the groundwork he undertook in the 20 games his first season comprised off. He will have a similar time frame in his first season with the Potters, so our support will be vital during this time.

And if we do allow Jones to implement his ideas and mould a squad to fit them then we could be in for some of the best years this club has experienced. The below graphs display goal and expected goal difference, pay close importance to the bold 0 line and how Luton (under Jones) never dip below it and how Stoke rarely venture above it. Jones could be the man to change the fortunes of the club and if you aren’t excited about our future under him then you will be soon.

Throw your diamonds in the sky if you feel the vibe.