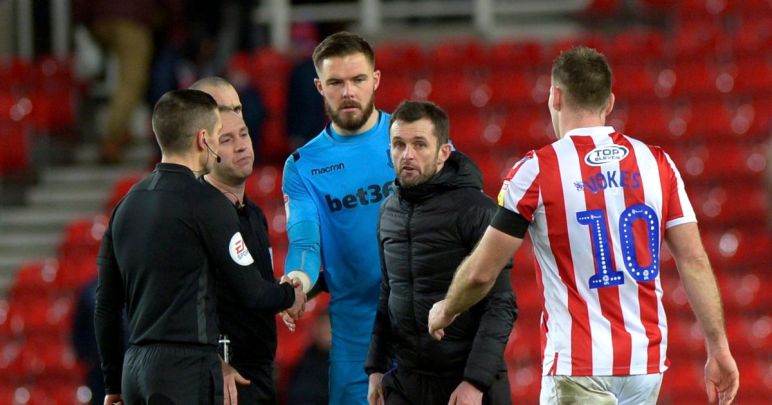 A binary thought process seems to have settled over the club, there appears to absolutely no nuance to the way in which matches are viewed. Passing forwards, winning matches – good; passing backwards, losing matches – bad. At face value that is the right way to look at matches, I’m not going to sit here and act like winning one match in six is a good thing.

It’s not surprising really that the Stoke City fan base is so dissatisfied, the football has been terrible for at least two years and arguably even longer. But it’s time to stop making excuses. As a fan base, we need to take responsibility for the crisis of confidence currently plaguing the squad.

Take Ryan Woods for example, who within the space of six short months has been transformed from a swaggering conductor who orchestrated the tempo of the side to a player constantly looking over his shoulder, often spooked by his own shadow. Is this all due to the pressure placed on individuals by the fan base? Probably not. Does the constant booing of backward passes aimed at retaining possession play a role in this lack of confidence? Certainly.

This is not to say that the squad should never be criticised. But there are times, places and ways to do this. A narrow 1-0 loss to one of the best sides in the league, after playing a system for only the fourth time is certainly not the time to boo the squad during the game and off the pitch after both halves.

🗣️ Nathan Jones has given his reaction after the Potters are beaten at the bet365 Stadium.

The division between football supporter and consumer is becoming increasingly blurred by the commodification of our sport. And while most fans fight against the almost inevitable classification of consumer placed upon them by boards and governing bodies the Stoke fan base is embarrassingly embracing this categorisation. The inevitable booing after poor results conjures images much closer to disgruntled shoppers than it does a fan base who have the club’s best interests at heart. The same can be said of the early criticism of Jones.

Yesterday marked a month of Jones’ time at the helm of the club and already there is widespread questioning of his system. Yes, he has made strange decisions and selections, and questioning these is natural. But the rounding on a system the squad is still desperately unfamiliar with is ludicrous.

And I’m not sure it even comes from a place of wanting the club to do better. The calls to move to a traditional 442 seem to be a lot more to do with wanting Stoke to play the system the critic wants them to than they do with making Stoke a better side. Jones has got the job because of the diamond, it was key to his success at Luton, and I’m deeply concerned at the fervent questioning of it only one month into the project.

Jones has begged the fan base to get on board, and his post-match interview yesterday was the first hint of annoyance with us. Jones was supposed to be given a free run up until next August. Instead, we appear to be standing at the top of a steep slippery slope. The continued booing risks alienating yet another manager, in charge of an already alienated squad. If we lose Jones we will be one of those clubs.

No one wants a Stoke City Netflix documentary, so stop f*cking booing.