I was born in 1993. I’ve always felt good about that, being born in a ‘great Stoke year’. Naturally, this probably makes me not quite as well-positioned to judge ‘Macari’s Red and White Army’ as the fans who experienced it. My biggest connection to Stoke’s class of ’93 is that my middle name is Mark, after Mark Stein. My first name is in honour of Bowie, but Dad sometimes claims I’m named for Dave Regis. Geniuses all, but I tell people it’s the musician.

Nostalgia though has always been a massive part of my Stoke supporting life. I hark back to Peter Hoekstra and Peter Thorne, but for people of my dad’s generation, this is always the team they talk about. For a layman, it is maybe surprising considering this was a third-tier side, but we know it’s not about the level or perceived qualities of your team, it’s about the memories they create.

Macari’s Red and White Army is an hour of shared memories and memorabilia. It is unashamedly nostalgic for that Stoke side. Quite rightly too, as this was a side that went full tilt at a title and became ‘the’ Stoke team for a generation.

We hear from the players. We hear from the manager. We hear from fans and from journalists. From the bet365 to local cafes and sitting rooms, we dip into all aspects of that season, and that’s vital. Had it been only players, it wouldn’t have been the same film. The film acknowledges that the fans’ feelings are every bit as important, if not more so than the players on the pitch. It was a shared promotion. Vis Unita Fortior. Even the film’s production – a crowdfunded, community effort – underlines this.

Weaving between the talking heads and match footage, the relatively short run time becomes a strength, as we bound along throughout the season – a timid start turning into a title surge. Spoiler alert: Stoke win the league. Stoke. City. Win. The. League. 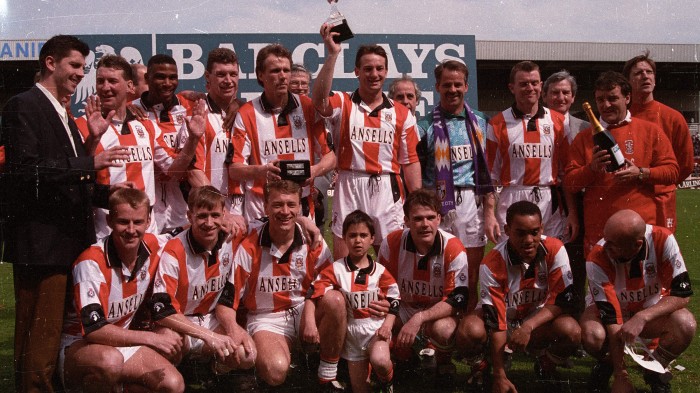 There are wins over the Vale, a mazy Rooster run at Blackpool (“pass eet, pass eet”), 25 games unbeaten and the game against Plymouth that put Stoke over the line. Perhaps more importantly though, it’s about what happened off the pitch that’s just as compelling. Reminiscences about the culture and sense of community in the city are well-expressed without becoming too “Back in my day…”. Poignantly, the family of Paul Ware remind us how football can turn ordinary men into heroes.

The film encapsulates the collective memory of football crowds. We share a common history, no matter when we were born or how we came to support Stoke. It’s the same thing that makes us get emotional about Banks and Matthews, even if we never saw them play. I dream of one day being able to create something like this, a happy hour of pure Stoke City celebration. It’s also so rich in great anecdotes it’s a fantastic laugh, too. Joe Barbieri’s artwork is as we’ve come to expect, spot on, as is the title. What Lou Macari did as a manager was one thing, what he has done and continues to do as man is another. The affection with which he is spoken about, and with which he speaks about others, is the film’s beating heart.

Macari’s Red and White Army is a fandom-affirming piece. It’s about getting football. Being part of a shared culture, history and identity. Again, as a non-local born after the fact, it made early 90’s Stoke-on-Trent feel like home. Whether you experienced 1992/93 first hand or you didn’t, you need to see this film. Sweet, joyous and as perfectly executed as a Steino strike.

There are a few copies of Macari’s Red and White Army left: https://www.macarisredandwhitearmy.com/