In this blog series, we look at Iconic Stoke Moments that have very little to do with footballing success, of which there are many.

Stoke City playing in Europe seems a distant memory now. After the success of the 2010/11 FA Cup run, our reward was a place in the Europa League. Those European games were great. Not because they were any more compelling than the Premier League, or had a higher standard of football, but because they were more fun.

At home and away games, people went determined to enjoy the experience and novelty. It didn’t really matter if we lost or got knocked out, and playing teams we’d literally never played before broke up the monotony of playing the likes of Bolton, Blackburn and Wigan.

We’d negotiated a potentially tricky two-legged affair against Hajduk Split, where Ryan Shotton was fucking buzzing off his nut (or so his tweets said) to see Stoke home with a late goal in Croatia to make it 2-0 (again, according to him, it was his goal). Switzerland’s FC Thun were quickly dispatched and then it came time for the main draw. It was so bizarre seeing “Stoke City (ENG)” on that piece of paper, seeing “That baldy bloke who does the UEFA draws” (now FIFA President Gianni Infantino), seeing the litany of famous and unheard of European names.

As the draw for the Group Stage unfolded, we dreamed of the potential away trips. Paris perhaps? Or Southern Spain? Amsterdam? Anywhere accessible in Western Europe would be grand. Birmingham City had got a trip to Bruges. Something similar to us would be fantastic.

Besiktas. Tel Aviv. Kiev. All fine cities I’m sure, not but not the most convenient for either fans or players. Stoke did some serious air miles and looking back we did rather well to get out the group. The competition provided welcome relief from a mediocre league campaign.

When Maccabi Tel Aviv came to town on 20th October 2011, Stoke had a respectable four points from a home game against Besiktas and a heartbreaking 1-1 draw in Kiev. Tel Aviv, the group’s whipping boys, provided little resistance to The Potters. Forwards Jones and Jerome put Stoke 2-0 up after 25 minutes before Ryan Shotton (at this point a winger in Tony Pulis’ side) made it 3-0 before the hour.

Then Stoke’s domination was threatened shortly before half time, Jerome shown a second yellow card for an apparent elbow on Tel Aviv’s number 14, Yoav Ziv.

I can’t remember if the Jerome red was justified, it may well have been, but Ziv’s theatrics in hitting the floor made him public enemy number one when the teams returned from the break. Tel Aviv had already seemed like the melodramatic sort of side that Stoke loved and hated playing against. The theatrics of their players were irritating the home support, and Ziv was the chief actor.

Booed at every touch, Ziv was already showing signs of frustrations as Stoke players snapped at his heels. Then, on 54 minutes, something wonderful happened.

Ziv cleared the ball down the touchline (eagle-eyed viewers noted that this is the ‘adjusted’ pitch Stoke were forced to play on during European games) and Ryan Shotton, perhaps as retribution for Jerome, trod on the Israeli defender’s foot. This meant that Ziv’s left boot came off his foot.

He then booted his boot at the linesman. Christos Akrivos, the Greek assistant ref, became the victim of a shoeing.

Now, if we slow down the footage, this incident becomes all the more fascinating. 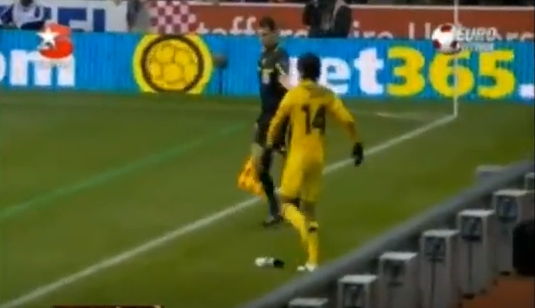 Does Ziv mean to go for the linesman? Is it a sub-conscious thing or has he simply not registered the linesman as he swings his bootless foot?

Secondly, would you kick a boot while wearing socks? Surely the potential to boot your own studs would cause you to hesitate? Admittedly, this has sat up nicely for Ziv. Studs facing away and with a good opportunity to get some purchase on the shot. 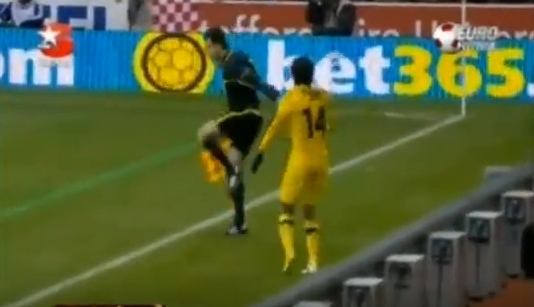 The connection: Akrivoswatches it all the way but is powerless to dodge it, and it hits him on the arm. Intentional or not, it’s a decent save.

The regret: Instantly, the flag is up from the lino and Ziv knows he’s done for. He tries to protest. We’ve all seen you kick your boot at the linesman, mate, what do you think’s going to happen? It’s this instantaneous reaction that makes me believe it isn’t deliberate. But that makes it all the funnier.

The punishment: The Greek Mike Dean produces the moment of the tournament as he shows the red card to Ziv, with the defender still holding the offending weapon.

What we have here is a textbook example of a footballing WEEEEEEEEEEY. All the ingredients are there: the red card, the ridiculousness of said red card, the fact Ziv was the villain of the piece. Perfect WEEEEEEEEEY. *Chef kisses fingers* That’s a perfect red card.

The WEEEEEEEEY from the Stoke crowd could be heard for miles around Staffordshire. If football can’t make you cheer or scream for your team scoring a goal, the next best thing is the WEEEEEEEEEEEEEEY.

Yoav Ziv played 134 games for Maccabi Tel Aviv and retired from football in 2017. He has won two State Cups, five Israeli Premier Leagues and represented his country 32 times. Yet, a handful of seconds in Stoke-on-Trent were truly the greatest moment of his career.

Tony Pulis was somewhat sympathetic towards Ziv, characteristically turning his ire towards the match officials:

“We have to be careful in respect of competitive sport.

“I think sometimes there has to be common sense. Two players were sent off tonight and I didn’t see a bone-crunching challenge the whole game.”

“Jerome punched me in the neck, I wasn’t cheating but the crowd went a bit crazy.

“With the boot it was an accident. It was just unlucky.”

If you want to suggest an iconic Stoke City moment that loosely plays with the term iconic, then feel free to write for us: wizardsofdrivelpodcast@gmail.com for submissions or suggest a moment by tweeting @wizardsofdrivel