While results haven’t picked up much since Nathan Jones took charge of the Potters, there were certainly positives to take from the latter period of an overall dismal campaign.

Much was expected of the senior international players at the club this season, but it has been the younger generation who have caught the attention in the past few weeks. Nathan Jones has handed opportunities to six of the youth team players since January including the Lasse Sorensen and 17-year old Nathan Collins but it was Thibaud Verlinden who perhaps sparkled most brightly as a bleak campaign came to a close.

19-year old Verlinden is the son of former Belgian international goalkeeper and Club Brugge legend Dany and he spent the early part of his development in Bruges before moving to Standard Liege at the age of ten. There, he was nurtured in an academy which has produced the current Belgian internationals Axel Witsel, Marouane Fellaini and Michy Batshuayi. A move to Stoke followed in 2015, where, after a first-team debut in a 4-0 League Cup win against Rochdale in 2017 and a brief stint on loan at German side St. Pauli, Verlinden was finally given his big chance in the first team.

Nathan Jones’ preferred system at Luton Town was a narrow 4-1-2-1-2 ‘diamond’ with width provided almost exclusively from advanced wing backs, meaning that wingers either had to adapt or they would have no place in his plans. Traditionally an inverted winger who could play on either side thanks to his two-footedness, Verlinden possesses all of the characteristics of a player who could be successful playing further infield.

There are notable similarities between himself and his idol Eden Hazard, right down to the build, the way they carry the ball and the spaces which they occupy both on and off the ball. The adaptability and flexibility to play further infield as a number ten in the past few games have been key to a slight improvement in performance levels and has given a small insight into Jones’ plans for next term. Although a more conventional diamond is his preferred formation, the personnel at Stoke have not allowed him to deploy this system thus far.

A complete lack of natural left wing-back has meant that Bruno Martins Indi had filled in at left back at first in a diamond with four at the back and then a standard 4-3-3 to try and get the best out of Stoke’s wide players. However, a brief shift to a 5-3-2 gave Verlinden the opportunity to emerge in the first team.

Deployed against league leaders Norwich City up front alongside a traditional number nine in Benik Afobe, he was tasked with being the link man when it came to attacking transitions. Horizontal movements between the Norwich midfield and defence pulled the opposition fullbacks infield, allowing the Stoke wing backs James McClean and Tom Edwards extra space down the flanks, which were overloaded further by the likes of Joe Allen and Sam Clucas advancing from their central roles in the diamond.

Verlinden was also used to create space within these channels by making runs from inside to outside, drawing Norwich’s sitting midfielders or centre halves wide. 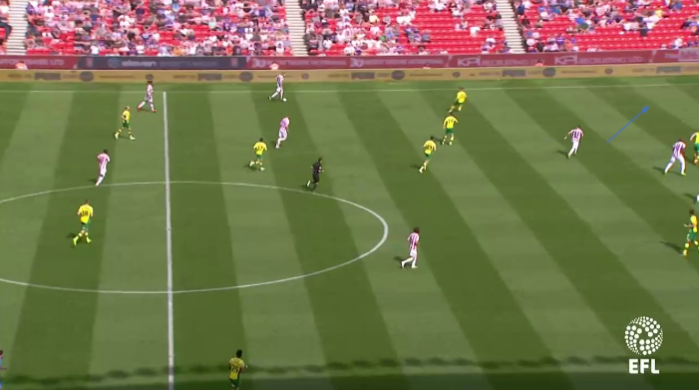 As well as being used to advance the ball through the thirds with his movement and passing, he was also used as an out-ball to relieve pressure when winning the ball deep in the Stoke half. The Hazard-like acceleration over 10 yards or so and ability to change direction at high speed proved pivotal in winning set pieces in attacking areas, as well as triggering counter attacks by driving through the centre of the pitch between Norwich midfielders. 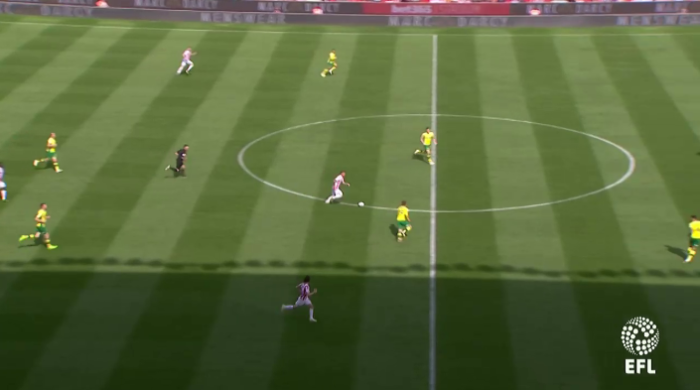 Since taking over, Nathan Jones has used a high press in the majority of his games, particularly against superior opposition. Against Norwich, a rigid 5-3-2 was used with Verlinden playing level with Benik Afobe up front. With Norwich looking to build their attacks from the back, Stoke’s forward players were used to pressure the goalkeeper and centre backs into playing the ball towards the full-backs rather than playing through the thirds to Norwich’s creative players in the centre of midfield.

Here, the pressing trap snapped shut as one of the wing backs, one of the wide central midfielders in the diamond and Verlinden surrounded them, forcing them to knock the ball long which in most cases led to a comfortable interception for one of the centre-halves.

The intensity of the press from Verlinden at the very top of the pitch was pivotal in disrupting Norwich’s rhythm and kept their chances at a premium, with both goals coming from individual errors from Ryan Shawcross and Ashley Williams respectively.

Next season may be the true acid test for Verlinden to prove he has the potential to play at a higher level. With numerous senior players departing at the end of their contracts or looking for a move back to the Premier League, it will be down to the likes of the Belgian to stake their claims in the first team and get Stoke back up.

Nathan Jones has already spoken of his desire for a small core group of players with youngsters bulking up the numbers, and the challenge for the likes of Verlinden, Souttar, Collins, Campbell et al is to be seen not as a squad number but as a genuine part of the first team, like Tom Edwards has done.

It is a huge opportunity for Verlinden in particular. A lack of creative attacking options (especially if either Ince or Bojan depart) means that if he can be moulded by Jones to play at the tip of his diamond in the favoured narrow 4-1-2-1-2, this is a big if, but he has the talent to sparkle as Stoke’s star man next term in what will hopefully be a fresh new dawn following a horrific couple of years for the club.

Do you want to write about Stoke City, have your stuff read and promoted, get honest feedback from Stokies, and get paid the price of a bet365 stadium pint? We’re after people to write for The Wizards of Drivel website this season.

We’re re-investing our Patreon funds to encourage great writing about our beloved club, so if you want to support that, give as little as $1 a month to patreon.com/wizardsofdrivel

If you want to write, email wizardsofdrivelpodcast@gmail.com

Listen to the latest podcast: