Knowing me, Wizards of Drivel, knowing you, Norwich City, a-ha.

It’s a trip to Carrow Road tomorrow for The Potters, so we’ve got all the preview action you could want in one place.

First off, here’s our podcast we did with Along Come Norwich

and here’s us talking to their site about our start to the season.

My claim to fame is that I have visited Stoke twice and seen two rare Norwich victories. 1997 winning 2-1 midweek under lights at the Victoria with goals from Keith O’Neil and Darren Eddie and then 1-0 at the Brittania with Jonny Howson doing the damage.  Since that 2-1 win Norwich City have only managed seven wins in 22 outings against the boys in red and white.

My first memories of Stoke go back to 1972 when both sides met for the first time in the top division. The Canaries were given a footballing lesson losing both games 2-0. Stoke stars I remember included Gordon Banks, Mike Pejic, Dennis Smith, Alan Bloor, George Eastham and the great Jimmy Greenhoff.

Things are looking up at Carrow Road at present after two very average stop and start seasons back in the Championship. The start of last season witnessed a new back room club management structure, new coach and plenty of new players with most arriving from outside the UK. At the start of this season most of the deadwood from the old regime have finally left and the squad improved again. The only issue is that The Canaries have had good Septembers over the last four seasons only for the next month to turn sour. 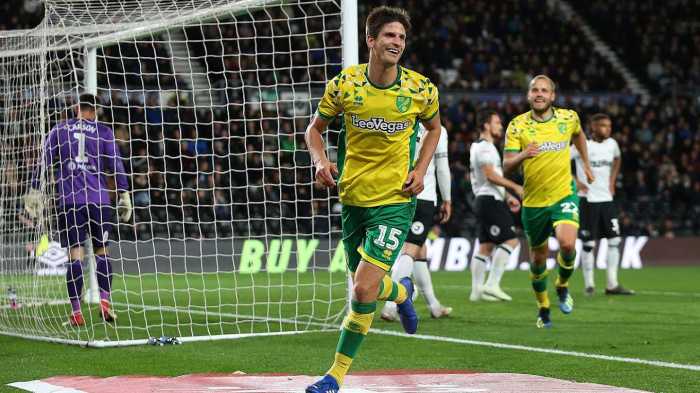 On the pitch, tactics have not changed, instead the players appear to have a greater bond, are making less mistakes, move the ball forward quicker, look more comfortable on the ball and most importantly have two experienced, team players up front in Teemu Pukki and Jordan Rhodes who make use of their chances. An added bonus has been the flawless introduction of home grown talent, Todd Cantwell and Max Aarons have joined Jamal Lewis into the first team with absolute ease.

Many fans felt there would have been changes for our last outing against Derby County, especially with the recent workload undertaken by the youngsters, however fatigue doesn’t appear to be an issue. With City playing one up front and Pukki playing well, Rhodes will have to sit out unless he gets the number 10 slot. This is not likely as Marco Stiepermann is probably the most improved player in a City shirt this season.

Vrancic is knocking hard on the door for a first team start and Farke could be considering resting Cantwell. Louis Thompson played superbly against Wycombe in the Carabao Cup but is still likely to be on the bench barring injuries.

Most clubs struggle initially following relegation from the Premiership and Stoke are no exception. A really poor relegation season, plenty of transfers and having to adapt to Championship football have not helped the transition. Beating Bolton and gaining a clean sheet will not have a marked improvement on confidence until they get on a run of victories.

Daniel Farke does have the capability to change games although he can be criticised for leaving it too late. The team can change shape and have demonstrated the ability not to drop their heads. The bench has strength in depth this season to change a game. Without experienced defenders Grant Handley and Ivo Pinto, the back four have been solid and after a very shaky start keeper Tim Krul is now on form and making valuable saves.

I’m not convinced with the signings made by Stoke. Too many players joining on the way down in their careers such as McClean and Williams and others like Afobe and Ince who have not produced consistency at their previous clubs… time will tell.

Norwich’s tactics are to keep the ball and they generally produce better statistics than their opponents either home or away. If Stoke can upset their rhythm, they could be in with a chance however they must be out to win the game outright rather than be calculated and try to nick it. I predict a 2-0 victory for the Canaries.